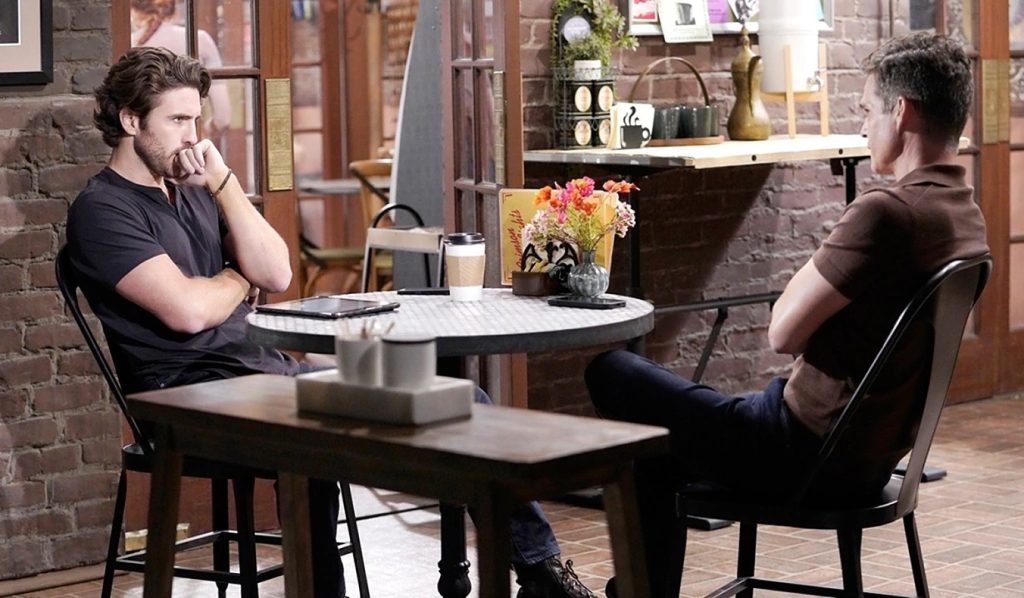 The Young And The Restless Spoilers Two Weeks Ahead (August 8-19, 2022): Chance Is Onto Something, Diane Gets EXPOSED?

The Young And The Restless spoilers for the next two weeks from August 8-19, 2022, reveal that Chance will dig deeper. It is teased that the detective will provide a last chance for both Nick and Victoria to come clean. Later, he will also approach Victor to find answers. Meanwhile, Nikki will try to execute her own plans when it comes to Chance and Diane. On the other hand, Chelsea might cross the line with Billy. He will be in a tough position to handle Chelsea. As for Sally, she will display her new and ruthless version in front of Adam. Keep reading, and let’s see what is to unfold in the next two weeks of Y&R.

The Young And The Restless Spoilers For The Week Of August 8-12, 2022: Chance Is After The Newmans

With the current situation, Nick and Victoria will have their last straw. The Young And The Restless spoilers show that Chance will offer Nick and Victoria the last chance to come clean. However, they will still be stuck to the same tape recorder that they have no clue whatsoever. As for Chance, he has already sniffed that something is fishy with Ashland’s murder.

Since Nick and Victoria are not ready to spill the beans, this will lead Chance to Visit Victor. He will reach the ranch and will ask Victor to admit his crimes. He will say that he knows Victor was the person who tried covering up the whole Ashland case. Starting from placing the car in the ravine and staging other acts. However, Victor will simply shove off his allegations stating that he doesn’t have evidence to prove it. Nevertheless, Chance will not stop here; he will go on a rampage to find evidence with Kevin.

In the meantime, Nikki will know that her family is getting dragged by Chance. She is likely to approach Abby to grab hold of her detective husband. In the coming episodes, Abby’s loyalty will be put to the test. Initially, Abby might not like the idea and ask Nikki to leave. But, later, she will realize that Chance is very loyal to his profession. This loyalty might cost her family big time. The real question is, will Nikki’s idea tempt Abby to take steps towards stopping Chance? We will know this in the upcoming episodes.

Phyllis is hell-bent on throwing Diane out of Genoa City. She has already plotted a plan, and now it is time to take it forward. The spoilers for The Young And The Restless show that Diane is all ears to whatever is happening in her environment. She will inform Kyle about Phyllis’ sabotaging agenda. However, Kyle will ask his mother to stay calm and be at peace.

On the other hand, Summer will also advise her mother to take things lightly. She and Kyle will play the role of peacemaker in Diane and Phyllis’ bickering. However, it is teased that Phyllis will move forward with her plan in action with the support of Nikki and Ashley.

Elsewhere, Tessa might take a new turn in her career. She is likely to face something surprising soon. Since Tessa cannot sing while she is recovering, it is hinted that she might take an interest in something else meanwhile.

The Young And The Restless Spoilers: Nick Spills The Beans, Elena Confronts Nate

Further on Y&R, Nick and Sharon will have a conversation. The spoilers tease that Nick will spill the beans and tell Sharon about his role in the whole Ashland case. They will dwell on the past and consider how cover-ups have usually turned out in Genoa City.

Meanwhile, Elena will get some advice from Devon. Later, she will confront Nate and might have some questions in store. She will ask him about his recent closeness of him with Imani. Does this hint that Nate and Elena’s relationship might get rough with time? Stay tuned to see what happens.

Elsewhere, Chelsea will create a mess for Billy. It might have something to do with the podcast or can even be about her connections with Johnny. However, it is also teased that Chelsea might cross lines with Billy and leave him in an awkward situation. When Lily comes to know this, what will she do to Chelsea? Will know this soon in the coming week.

Sally’s Side Of Investigation; Victor Is Upset About Adam

In previous episodes, Sally did push Nick for more questions regarding Ashland’s death. However, Nick got frustrated, and Sally had to stop. In the coming weeks, the spoilers show that Sally will again look out for evidence. The Y&R writers are about to show a rather ruthless side of Sally. She might start threatening some of the Newmans and try fishing for information on Ashland’s death.

In the meantime, Chloe might think otherwise. She will warn Sally to watch her every step as she will be meddling with pro players. As for Sally, she is determined to dig out the dirt sticking on the Newman family. Later, she will cross paths with Adam and might behave rudely towards him as she thinks he deserves it.

Speaking of Adam, he might feel lost and would be approached by Jack with a job opportunity in Jabot. Meanwhile, Victor will have a family meeting, and he will be upset that Adam is not present there. For Adam, his surname is just a combination of a couple of letters; it doesn’t stand any meaning. As for Victor, he will think that the situation is not right to have fights or arguments.

The Young And The Restless Spoilers For The Week Of August 15-19, 2022: Nikki’s Bold Step; Lily Caught In The Middle; Chance’s Investigation

During the week of August 15-19, Diane will make a vow to Jack. It is teased that Jack might feel a little bit drawn to her. Even though he is in denial, he might not help it if he starts liking her again. Meanwhile, Nikki will take another step as she knows that Diane surely has some dirt in her past. The spoilers for Y&R show that Nikki will take a bold step in her plan. She will hire an investigative reporter named Talia to expose Diane.

On the other end of the town, Chance will continue his search for evidence. Even if the culprits are his father-in-law and brother-in-law, he is not going to spare them. Meanwhile, Victor will try his best to cover up the crime. Fans know that the case could have easily been categorized under accidental/defensive death. But Victor, thinking he is right, messed up the whole case big time.

Lastly, Devon and Nate will face more problems. However, their never-ending bickering only reflects their unprofessional behavior at work. Whatever it is, Lily will soon find herself stuck in this cousin drama. Stay tuned and see how the different character development takes place. Watch The Young And The Restless, which airs every Weekdays on CBS. For more information, visit our website, TV Season & Spoilers.